The Holidays are wonderful in Shadow Brook and much of that is due to the diversity that exists in our neighborhood.

To celebrate the diversity of this amazing neighborhood we are starting a new tradition called, “Lighting up Shadow Brook.”  I have always been fascinated by the many celebrations and holidays at this time of year around the world and among different cultures – Diwali, Hannukah, Thanksgiving, Kwanzaa, Ramadan, Christmas, Lunar New Year, and Omisoka, to name a few.  Interestingly while the traditions can vary, many of these holidays do have a singular theme that is common to all – light in the face of darkness and gratitude as we embark on new beginnings. 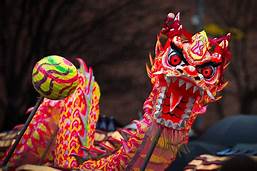 Did you know Lunar New Year is coming up? This year it falls on Friday, February 12th. Lunar New Year, also known as Chinese New Year or the Spring Festival,  is the most important and widely celebrated festival in Asian communities around the world. This is a special time for family reunions to welcome the new year.

Growing up in Taiwan, Chinese New Year is absolutely my favorite holiday. Not only did we celebrate and feast for 15 days, but also my family will prepare all kinds of special and delicious dishes which have symbolic meanings, hoping the new year will bring good luck, prosperity and happiness. After the huge meal on the Chinese New Year Eve, we will stay up until midnight and light up firecrackers. Why? You ask. According to legend, the wild beast called “Nian” (which means year) would attack the people and eat livestock at the end of the year. However, Nian was scared of the loud sound and bright red color. That’s why firecrackers are lit and red is used everywhere. One of the important traditions is that kids are given red envelopes which fill with money, blessing them for their growth.

Hanukkah, like Dewali, is also known as the Festival of Lights. Based on the Jewish calendar, this year it falls on Dec. 10th.  It’s a

The most recognized symbol of the holiday is the Menorah, a candelabra with eight candles and a “Shamash” used to light all the others. The Shamash lites one candle the first night, adding a candle each night, for a total of eight nights. But why eight nights?

The story of Hanukkah is the story of the Jewish people winning the freedom to practice their religion by overthrowing the Greek ruler in Palestine who insisted the Jews pray to the Greek gods and no longer practice their own religion and customs.  After their victory the Jews wanted to relight the Menorah in their Temple. However, only a small bit of oil, good for only one night was found. But that little bit of oil burned for eight nights. It was considered a miracle, and explains why Hanukkah is eight days long.

The dreidel, a top with four sides, is another well recognized symbol.  It has a Hebrew letter on each side standing for the sentence “Nes Gadol Hayah Sham” –  A Great Miracle Happened There. Children and adults all play the dreidel game betting on which letter will show itself after a spin.

Potato pancakes, or Latkes, are the favorite food of Hanukkah. Fried and crispy they are often served with applesauce or sour cream for a delicious treat! Jelly filled donuts are another food of the holiday and, like Latkes, are cooked in oil, reminiscent of the oil found in the temple.

Originally, children were given “Gelt” (money) to give to their teachers or to a charity. Today that has evolved into gift giving and has become part of the holiday traditions. Some families still give Gelt as a gift, some give children gifts each night starting small and growing to an exciting final gift, while others sprinkle gifts through out the holiday.

Though Hanukkah is one of the lesser holidays in the Jewish religion it is one of the favorites that reminds us of the importance of freedom of religion and helps to light up the winter with fun, good food and family.  Happy Hanukkah to all! 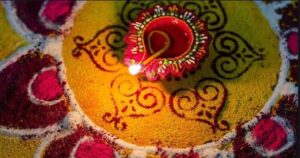 Diwali is one of the first holidays of fall / winter season celebrated over 5 days this year beginning on November 12th.  The celebration is usually in early autumn after the conclusion of summer harvest and before the new moon so each year the date varies and is tied to the lunar calendar.  Diwali is known as the Festival of Lights celebrating the Victory of light over darkness, good over evil, and knowledge over ignorance.   It is celebrated by Hindus, Jains, Sikhs, and some Buddhists. Celebrants will clean and light their homes, create beautiful rangoli (decorations made with colored powder), light diyas (oil lamps/candles), and offer puja (or worship) to the Divine.  They will also share sweets and gifts with others on this auspicious occasion. Traditions vary across all of the religions and regions that celebrate Diwali but the one message that is shared is that at the time of Diwali they celebrate the inner light that protects us all by embracing our family and neighbors.  So, on behalf of the Shadow Brook Board we would like to wish all our neighbors a Happy Diwali.

We’d love to continue to celebrate Lighting Up Shadow Brook from now through Lunar New Year and publish other articles about holiday traditions in the Splasher or on the website.  If you are interested in providing an article about a holiday your family celebrates please send it to social@nullshadowbrook.org.