eague consists of six local cabana teams from around south San Jose.  Anyone is welcome to come to any of the Cabana League Dual Meets (competition between two Cabana League teams) and watch the Shadow Brook Sharks during the swim season of June to July. Swim practices start in April and continue throughout the swim season.

Children of Shadow Brook HOA members and children of Summer Associate members, ages 18 years and younger, are eligible to join the swim team. As a Cabana swim team, the Sharks’ main objective is to have fun in and out of the water. Throughout the season, we also plan events and social activities to encourage team spirit and friendship.

As a Swim team, we have a competitive spirit and strive to be the best of the league. However, there is equal emphasis on each swimmer, regardless of ability, to improve their skills in all four strokes, as well as their individual times throughout the season.

Or you can email your questions to  shadowbrooksharks@nullgmail.com, or at Shadow Brook Sharks Facebook page.

We look forward to seeing you at the pool this Summer and Go Sharks!

Shadow Brook is home to the reigning 2019 Cabana League Champions. The Sharks also grabbed the grand collection of awards including: 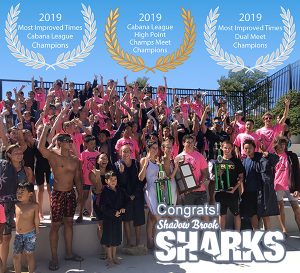 The Shadow Brook Swim Club also hosts the Almaden Riptide year-round swim team for practices throughout the year.  Many of our Shadow Brook Sharks also swim for Riptide.